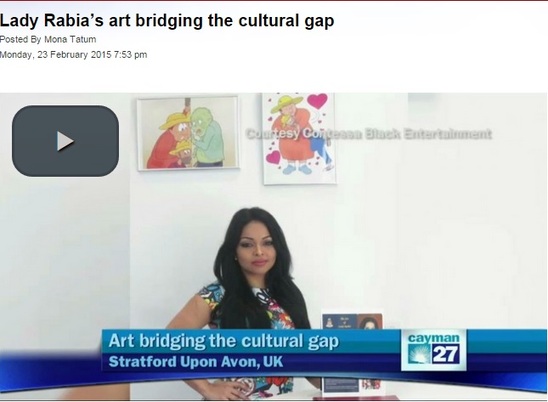 
Caymanian culture is in the spotlight in the United Kingdom. Author and storyteller, Lady Rabia Abdul-Hakim, was invited to display her Cayman-centric cartoon art series “New Heroes Wanted” at the Stratford Arts House in Stratford Upon Avon in the UK.
She says what makes the work unique is that the images highlight Caymanian heritage, and they are sparking a different kind of interest in our islands.

“The brands that we are creating, which are on exhibit, are actually promoting positive inter-cultural relations and improving inter-cultural understanding. So that’s why this is so important. And currently we are the only people; this company Contessa Black Entertainment, that is really pioneering this right now. Not just for Cayman Islands, but possibly for all of the Caribbean islands at present,” she said.

Lady Rabia’s illustrations will be on display until Monday 2 March.

Development of one panel of the Kaa Kaa & Tokyo comic strip that wil be featured every Friday in INEWS. 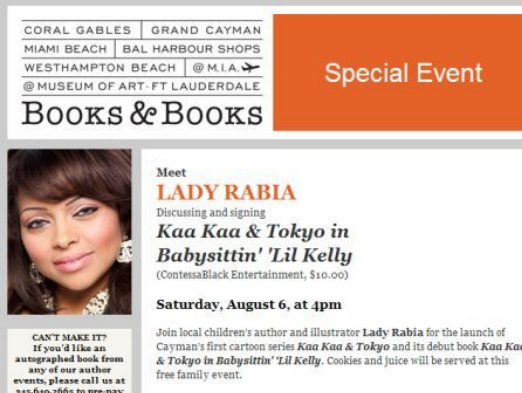 Posted on Mon, 08/01/2011 - 07:18 in Local News (CNS): Children’s author and illustrator Lady Rabia launched Cayman’s first cartoon series, Kaa Kaa & Tokyo, and its debut book, Kaa Kaa & Tokyo in Babysittin’ ‘Lil Kelly, on Saturday. A Cayman Bracker, Rabia has already published forty-eight short children’s stories and articles for Qkids Comics in Saudi Arabia. Based in the1930’s, this debut series captures the essence of “the good ole days”, when the Cayman Islands were merely a tiny, isolated fishing community, according to a release about the new books.

The series features the characters Kaa Kaa, and Tokyo, her clumsy 57-year-old nephew, who constantly experiences one mishap after another. “Although Kaa Kaa is always on-hand to provide her maternal protection, it is always accompanied by her witty sarcasm and the funny duo is always surrounded by an array of equally amusing neighbours,” the release stated.

INEWS CAYMAN: August 3, 2011 By Kevin Creary After a period of extensive travel, Cayman Brac native, Rabia Abdul Akim has returned to Cayman to share her worldly experiences through her new books.

The intrigue of foreign cultures has inspired the Caymanian writer, former beauty queen, tae kwon do champion, businesswoman and mother of six to write The Kaa Kaa & Tokyo series of books.

Growing up in Cayman Brac, Rabia benefited from the camaraderie of island life and after experiencing the uniqueness of life in Saudi Arabia, she plans to give back to her country, through the publications.

Despite the many hats Rabia wears, she still thinks that there is more she can give, “I always wanted to be a writer, having resided overseas for many years and so I wanted to share my culture with my kids. I am launching a book on the 6th August. It will be the first book of fully developed animated characters for the Cayman Islands.”